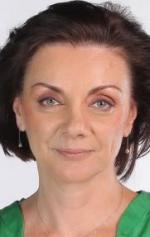 актер
Carmen Tanase is a Romanian actress. After graduating The Drama and Film Institute from Bucharest, in 1984, she joined the company of Vasile Alecsandri National Theatre in Iaşi and then moved back to the capital city of Romania. Since 1990, she is a member of the Odeon Theatre company from Bucharest. As a student, she played in Dostoevsky's The Possessed, in John Steinbeck's Sweet Thursday, in Butterflies, Butterflies by the Italian playwright Aldo Nicolaj etc. Following the fall of the Romanian communist regime, in 1989, she also involved herself in the independent artistic movements that flourished after these events. She toured the world with Radu Duda, the two of them playing in A Report to an Academy, the adaptation of a short story by Franz Kafka, directed by Cristina Iovita.