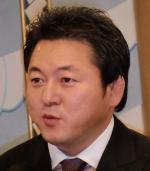 Mainoumi Shūhei is a former sumo wrestler from Aomori, Japan. His highest rank was komusubi. During the 1990s he was one of the most popular wrestlers in sumo due to his wide variety of techniques and great fighting spirit in battling opponents nearly twice his size.