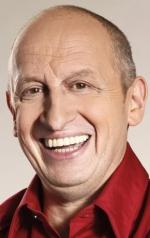 Jan Vladimír Kraus is a Czech actor and TV host. He appeared in more than eighty films since 1967. Kraus was also a judge on Česko Slovensko má talent. He is known as the host of the TV show Show Jana Krause. His father Ota Kraus, a holocaust survivor, was a journalist and writer. The writer Ivan Kraus is his brother.