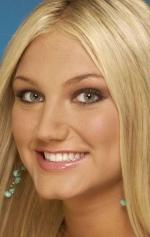 актер
Brooke Ellen Bollea, better known by her stage name Brooke Hogan, is an American reality television star, actress, singer-songwriter, and media personality. She is the daughter of the famous professional wrestler Hulk Hogan. Brooke took an early interest in music, and began working on her first studio album in 2002. In an attempt to promote her music career, Hogan and her father appeared in a one-hour special on VH1. The special proved to be a ratings success, leading to Hogan and her family starring in the reality television series Hogan Knows Best. The show saw a then teenage Brooke struggling with her overprotective father and recording her debut album. Her first studio album, Undiscovered, was released in 2006. It was preceded by the single About Us, which entered the top-forty of the Billboard Hot 100 chart.