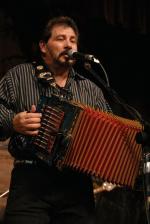 Jo-El Sonnier is an American singer-songwriter and accordionist who performs country music and Cajun music. Originally signed to Mercury Nashville Records, Sonnier charted several minor singles on the Billboard country charts in the late 1970s. By the late 1980s, he had signed to RCA Records, breaking through with the Top Ten hits No More One More Time and a cover of Richard Thompson's Tear Stained Letter. Although his chart success waned by the late 1980s, he has continued recording music. He has recorded more than thirty albums, primarily on independent labels.