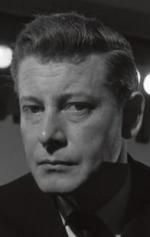 Albert Eugen Rollomann, better known as Dieter Borsche, was a German actor. He appeared in over 90 films between 1935 and 1981. He was born in Hanover, Germany and died in Nuremberg, Germany. Borsche became a film star after World War II following his performance in Keepers of the Night.