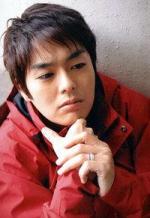 Kei Horie is a Japanese former actor, writer, film producer and director. He is known as Gaku Washio/GaoYellow in 2001's Super Sentai's series, Hyakujuu Sentai GaoRanger. He reprised his role on one more occasion in the Super Sentai teamup, Hurricanger VS Gaoranger. He also has an older brother, Kazuma Horie, who is a voice actor.