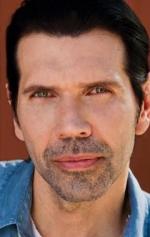 Samhain is an American rock band formed by singer Glenn Danzig in 1983, immediately following his departure from Misfits. Samhain played in more of a deathrock and heavy metal-infused style of horror punk than Danzig's previous band. Glenn Danzig originally planned Samhain as a side project with Eerie Von. After his earlier group, the Misfits, contentiously dissolved, Samhain became his full-time band. Samhain is the least-celebrated of Danzig's major musical outlets and catalogs a transitional period in his musical career, bridging the gap between the punk rock of the Misfits and the dark, heavy metal and blues-influenced sound of Danzig. Both Samhain and its successor, Danzig, use the same horned skull image originally drawn by artist Michael Golden for the cover of the 1984 comic book The Saga of Crystar No. 8, published by Marvel Comics. The font often used in the name logo of Samhain, and later Danzig, is taken from the film The Giant Gila Monster.