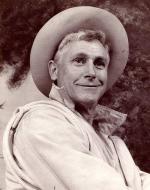 George Dunn was an American actor, humorist, vaudeville performer, and satirist. He often portrayed Western characters in film and television. His homespun wit, rope tricks, and satirizing of American life, politics, and sports reflected the strong influence Will Rogers had on him as an entertainer.