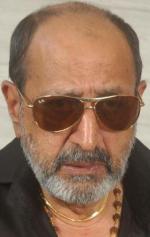 Tinnu Anand, sometimes referred to as Tinu Anand or Virender Raj Anand, is an Indian actor, writer and director from Bollywood, who is most known as the director of Amitabh Bachchan's movies including, Kaalia, Shahenshah, Main Azaad Hoon and Major Saab. He is the son of veteran writer Inder Raj Anand, brother of producer Bittu Anand and uncle of director Siddharth Anand.