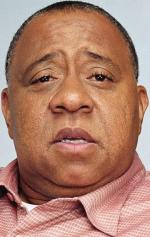 Barry Shabaka Henley is an American character actor. Henley has appeared as a regular in a number of television series, has numerous film credits, and is a fixture in films by director Michael Mann, having worked with the director five times. His stage name, Shabaka, is taken from a Pharaoh from Egypt's 25th dynasty, who ruled from 721-707 BC.