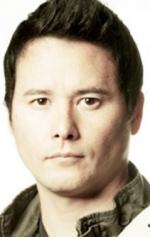 John Jay Bosch, known as Johnny Yong Bosch, is an American actor, voice actor, martial artist and musician. His first major role was the portrayal of Adam Park, the second Black Power Ranger and later, the Green Zeo Ranger and first Green Turbo Ranger in the Power Rangers franchise, which led to roles in some martial arts television and feature films. He provides the English voices for a number of anime productions and video games, including Shotaro Kaneda in Akira, Vash the Stampede in Trigun, Ichigo Kurosaki in Bleach, Sasori in Naruto, Renton Thurston in Eureka Seven, Itsuki Koizumi in The Melancholy of Haruhi Suzumiya, Lelouch Lamperouge in Code Geass: Lelouch of the Rebellion, Izaya Orihara in Durarara!!, Noby Nobi in Doraemon, Yu Narukami and Tohru Adachi in the Persona 4 series, Yukio Okumura in Blue Exorcist, Hajime Hinata/Izuru Kamukura in the Danganronpa series. He is the front man of the band Eyeshine. Bosch is located in Los Angeles and does most of his voice-over work at Bang Zoom! Entertainment, Animaze, New Generation Pictures, Studiopolis, and on some occasions travels to Dallas to record shows for Funimation. In the Viz Media dubbing of Sailor Moon and the newer Sailor Moon Crystal, he voices Artemis, and in Yo-kai Watch he voices the protagonist Nate Adams.