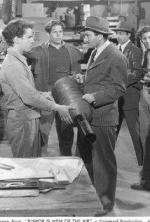 Henry Richard Huntz Hall was an American radio, theatrical, and motion picture performer noted primarily for his roles in the Dead End Kids movies, such as Angels with Dirty Faces, which gave way to the The Bowery Boys movie franchise, a prolific and highly successful series of comedies in the 1940s and 1950s.