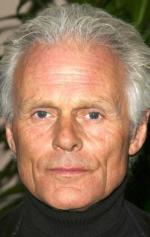 Michael Philip Des Barres is an English actor and rock singer. He is known for playing the recurring role of Murdoc on the television show MacGyver and for replacing Robert Palmer in the band Power Station, fronting the band at the 1985 Live Aid concert. He is also the ex-husband of groupie, actress and author Pamela Des Barres and is written about extensively in two of her books, I'm with the Band: Confessions of a Groupie and Take Another Little Piece of My Heart.