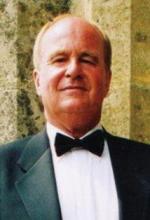 Michael John Lewis is a British composer, primarily of film music. Educated at the Guildhall School of Music and Drama, his credits include The Madwoman of Chaillot for which he won an Ivor Novello Award, The Man Who Haunted Himself, Theatre of Blood and The Medusa Touch. He composed the score for the 1973 Broadway musical Cyrano, as well as several hymns and choral music, many of which are inspired by and performed in his native Wales.