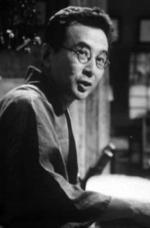 Nobuo Nakamura was a Japanese actor, who made notable appearances in the films of Akira Kurosawa and Yasujirō Ozu in the 1950s and 1960s. Perhaps his most famous roles in the West were those of the callous deputy mayor in Kurosawa's Ikiru, and the hairdresser's henpecked husband in Ozu's Tokyo Story.