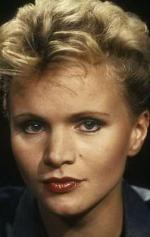 актер
Renette Pauline Soutendijk, known professionally as Renée Soutendijk, is a Dutch actress. She was a favorite star of director Paul Verhoeven's films and is perhaps best known for her work in his 1980 release Spetters. Her good looks and striking blond hair secured her status as a Dutch sex symbol in the 1980s. She has also played a number of television and stage roles, and is one of the leads in the 2012 RTL 4 television series Moordvrouw.