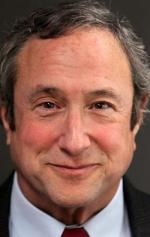 Stuart Pankin is an American actor who is best known for his comedy roles. He has frequently performed at St. Vincent Summer Theatre. On television, he has played anchor Bob Charles in Not Necessarily the News, Earl Sinclair in Dinosaurs and Orthodox Jew Ben Heineman in Curb Your Enthusiasm, as well as making many guest appearances and lending his voice to animated shows. Among his approximately three dozen films was Hollywood Knights, and he starred in Zenon: Girl of the 21st Century and its sequels, as Commander Plank. He also appeared in Honey, We Shrunk Ourselves and Arachnophobia and as Jimmy in Fatal Attraction.