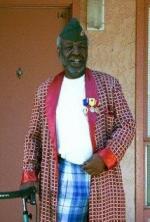 James McEachin is an American actor, award-winning author, and known for his many character roles such as portraying police Lieutenant Brock in several Perry Mason television movies. As the star of the television detective series Tenafly he is one of the last surviving actors to have starred as a title character from a series featured on the NBC Mystery Movie.