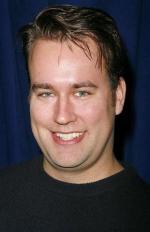 Marc Thompson is an American voice actor who has worked for 4Kids Entertainment, NYAV Post and DuArt Film and Video. Some of his major roles include Kevin Thompson, Anthony DeMartino, Timothy O'Neill in Daria. He voices Casey Jones in the 2003 version of the Teenage Mutant Ninja Turtles cartoons and video games. He is the narrator of numerous Star Wars audio books including the Legacy of the Force and Fate of the Jedi series. He earned his BFA from New York University's Tisch School of the Arts in 1997.